Our award-winning app, Marvel Hero Tales (MHT), celebrated its first birthday in June.  At Kuato Studios we strive to pack our apps full of fun with an educational spin. As Apple so aptly put it in last month’s App Store feature, MHT is an educational game in disguise. The app was conceptualised as a means of allowing children to develop their literacy skills in an environment they are most comfortable in – in this case a Marvel superhero-inhabited city on their parent’s phone or tablet. They solve in-game quests using language – exposing them to new words, their context and meaning, and allowing them to explore how they can be used in a sentence.

Players build sentences using animated word cards in order to describe how they want their character to act in the scenario. The game analyses their sentences and word choices and results are then visually displayed through a mix of animated characters or comic cut-scenes.

For example – when Scarlet Witch (Avengers) runs into a balaclava-clad super-villain mid-theft, children use the sentence builder to describe what they are going to do to solve the quest. As shown below, children have the choice whether to ‘quickly’, ‘lightly’, or ‘powerfully’ attack the ‘Super Thief’. Since he’s described as ‘Super’, ‘quickly’ or ‘lightly’ aren’t going to cut it… 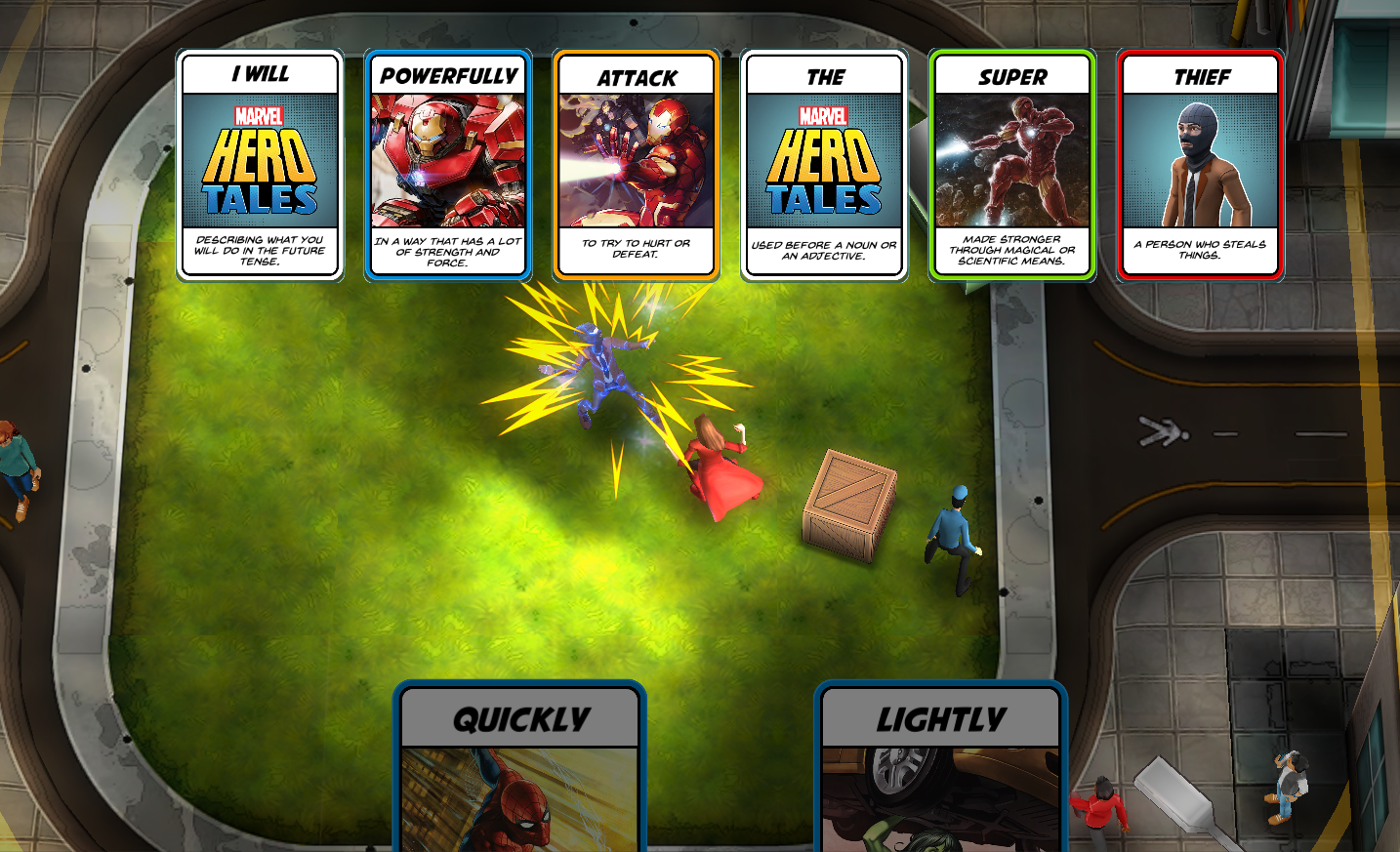 The app was developed in conjunction with experts at the University of Oregon Centre for Applied Second Language Studies, as well as teachers in the UK to build word decks suitable for children aged 7-11.

Working with the Good Play Guide has been huge for MHT. Dr Amanda Gummer, their CEO, is an advocate for the app, and has been a catalyst in demonstrating MHT to parents and children. This allows us to receive feedback to hone and improve the app and ultimately create a better user experience over time. On behalf of Kuato, I’d like to express thanks to Amanda – she’s been one of the core pillars of MHT’s development.

Whilst we’re on the topic of thanks – everybody our on team who has worked on Marvel Hero Tales is a superhero. The game looks beautiful, which has led to our recent ‘App of the Day’ feature with Apple, and a 2020 Kids Screen Award. These are fantastic achievements and really highlight all the hard work the team has put into it.

The main evolution in the year since we released the app has been surrounding the NAS (Narrative Action System), which is our key piece of technology. The NAS allows the players themselves to influence the narrative of stories in Marvel Hero Tales using the power of words. This has been a system that we have iterated and improved over the app’s life cycle – we have had some really positive feedback around this mechanic, which has shown how kids are interacting with the app and enjoying the experience.

It’s been an awesome first year for Marvel Hero Tales, and it has a really exciting future ahead. We’re regularly upgrading the app, expanding our Hero Roster and adding more playable events in game. We’re driven by the fact that our app allows kids to keep discovering new words, learn their context and meaning through play, then use these words in their daily language and school work.