Skip to content
People of Kuato: Passion for programming with Daniela

People of Kuato: Passion for programming with Daniela

Daniela is a Unity Developer at Kuato, and primarily works on Disney Story Realms. Programming, however, is just one of her creative outlets, and wasn’t her original career intention. She’s a passionate painter, writer, and doll collector, and she’s also into cartomancy…

“A few years ago I visited a bookstore to buy some new books where I came across an eye catching fantasy fortune telling card deck. Despite never really being a spiritual person the deck was extremely beautiful so I decided to buy it. Fast forward to today and I have not only learnt cartomancy but am reasonably good at it.” 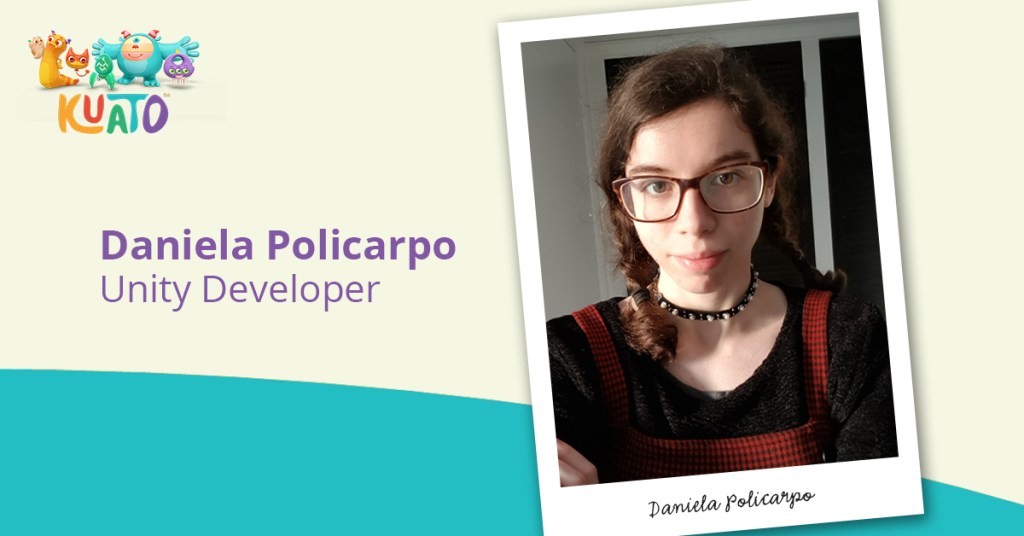 What do you do at Kuato?

I’m a programmer! I add new features to games and fix any nasty bugs that cross my path. My latest work was setting up the Aladdin realm in Disney Story Realms: defining a navmesh for Aladdin to walk on, setting up characters for Aladdin to interact with, and adding code support for artists to add special effects and sounds to animations. For example, when the Genie comes out of his lamp, the code ensures there are spawning particles and magic sounds throughout the animation.

Besides this I also work on improving the systems we have in our games. An example of this would be the rework of the popup system in Disney Story Realms.  I changed it to be more data-driven so that anyone could add a new popup to the game without requiring code input.

What did you do beforehand?

Before moving to the UK, I was living in sunny Lisbon. I started my career in web development, working for an e-commerce company. After a few months I launched my own chat room that focused on helping people with anxiety or depression. At the time I wanted to get a job in gaming but the industry in Portugal was very small, which led me to start applying to companies in other countries.

I got a reply from a video game studio in England, went through the interview process and in January 2019 I moved. The HR was wonderful, they helped me relocate, answered all my questions and guided me through the bureaucracy of having the right to work in the UK. All in all, it wasn’t as hard and scary as I feared, even with Brexit creeping up on us. It was a wonderful experience, I love living here, and my colleagues at the time made me feel very welcome.

How did you get into coding?

I never planned to be a programmer. When I was a teenager I applied to a high school that specialised in Art. In the first year we tried different areas and in the second year we chose the area we wanted to specialise in. I did pottery, design, theatre costumes/props and much more. In the second year I chose multimedia. I wanted to make art for games, that was my passion.

When I reached university there was only one course related to games, where you could learn everything about game development (art, programming, design, etc). I was excited about the art side, and less so about maths and programming. I wasn’t expecting to like either of those, but surprisingly I fell in love with code and realised how creative you could be with that knowledge. I loved the challenges of making a game and I just wanted to learn as much as I possibly could.

During university I managed a community platform that supported people with anxiety and depression. I wanted to make a chat room for them with cool gamification concepts that was safer and better than the alternative we had at the time. As a result I started learning web development, where I discovered and joined a Brazilian online project that had a mission of connecting mentors with mentees to share knowledge. “All knowledge must be shared because only education can change the world.” – is their motto

I was paired with a great mentor who gave me helpful insight into software architecture, PHP and TypeScript best practices. I also got help from a programmer from my own community who taught me all about network requests and how to set up a server. With all of this knowledge I was able to get my first job as a web developer, create my chat room and move my community there, which is one of the proudest achievements.

What advice would you give any young people starting a career in your field?

Firstly, don’t let your background or stereotypes limit what you can achieve.

If you come from a background that has nothing to do with maths or programming like I did, it may feel intimidating at first. Occasionally other people can make you feel lesser than them because of their misconceptions about your background or field. If you’re coming to an industry dominated by the opposite sex, you shouldn’t let sexism hold you back, you have to stand your ground.

With the right mindset, you can learn anything that gets thrown at you. You may have to work harder than others, it may take you longer, but you will get there. At some point people will notice that you’re just as good as them. Peers who disregarded my programming advice in the first year of university then started asking me for advice in the second year because they saw that I do have good input to give. At the end of the day don’t let other people or any stereotypes bring you down, work hard, do your best and you’ll make it.

Secondly, work for a game company before starting your own studio/making your own commercial game.

Once I finished university, some of my peers decided to make their own game, having aspirations to start their own studio. Some of them did this because there weren’t any job openings in the gaming industry in Portugal. They thought that, if they got a job making websites or apps, they would be giving up on their dream of game programming. It took them three years to finish their game and in the end no one bought it. Why? Because good games are hard to make. You need to learn from people with more experience than you, you need to have a good team around you with different skill sets. Your programming skills from university won’t cut it. You know so little at that point in your life so it can be devastating to face the reality of the game you worked for years on not going anywhere.

These peers that I mentioned, none of them are working in gaming today.

So to avoid this mistake, get a job before taking on the gigantic step of making your own game for a living. Apply for job openings in companies where you live or move abroad! Do your best to get a job in gaming and if you can’t then don’t panic – you’re not wasting your time. In any job or field you will learn and develop your skills.

Which video games inspire you, and why?

The video game that inspired me the most to this day has to be The Cat Lady from Harvester Games. It has such unique visuals combined with a great story and puzzles to solve. I’m a big fan of Rem Michalski’s games as they clearly show that games are a form of art without taking away the fun and excitement of playing.

Besides that, I love the possibilities of MMORPGs. I played several during my teenage years and have very fond memories of creating hidden farms, having ship fights with my friends in ArcheAge, capturing rare mobs in Perfect World, feeding armour and pretty much anything to my pet in Lunia, the list goes on. I even went to the game court one time because a player killed my sheep – that was so exciting.