Marvel Hero Tales… Like you’ve never known it before!

The app is jam-packed with hundreds of new learnable words, awesome mastermind battles, and uncountable unique outcomes based on the words that a player chooses. Literacy-based learning has never been so dynamic for children aged five to eleven!

Green Goblin has devised a cunning plan to free Marvel’s most dangerous criminal masterminds from jail. The streets of New York City are running amok with crime. Nick Fury (Avengers) has enlisted the help of Marvel’s community of heroes, including Spider-Man, Hulk and Black Panther, and many more!

Heroes must use their wit, might, and powers of deduction to investigate the causes of the chaos, and send the criminal masterminds back to jail.

Drop into New York City, wander through the perilous streets, deploy super-charged sentences, and save the day! 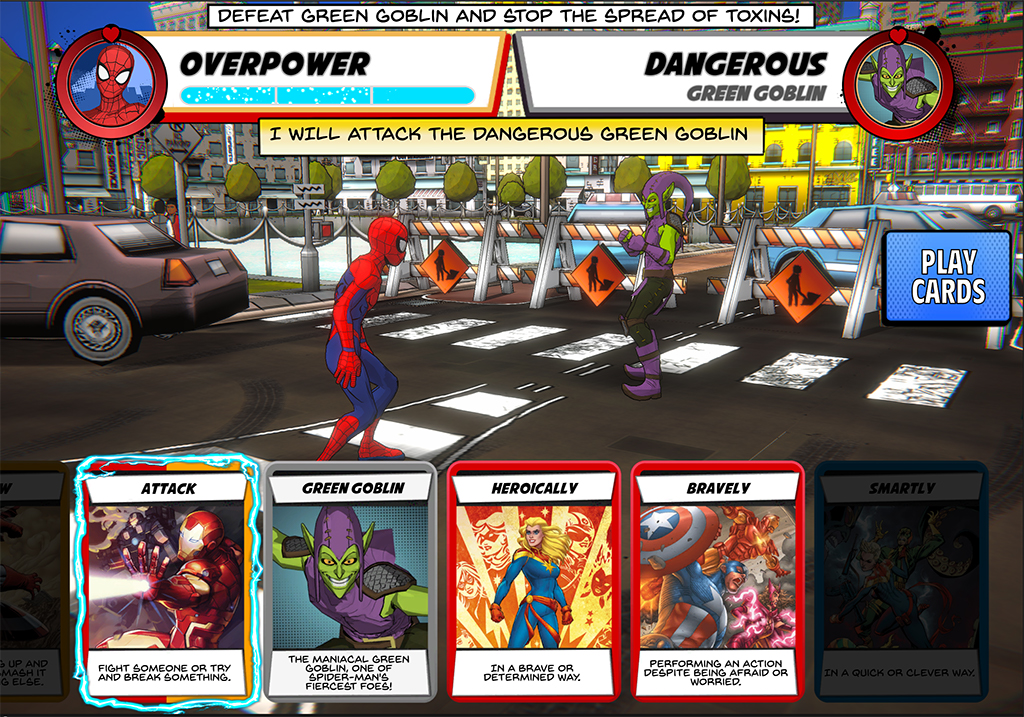 The revamped MHT allows children to find solutions to quests using the power of their words, in a way never seen before in a mobile app.

The gameplay is centered around the usage (and collection) of animated word cards. Cards are deployed to build sentences, and depending on what a player decides to do, they experience unique outcomes. This core mechanic empowers children to try out many different word combinations, and explore the game using language. It also encourages them to replay missions, and try new word combinations to produce different outcomes. 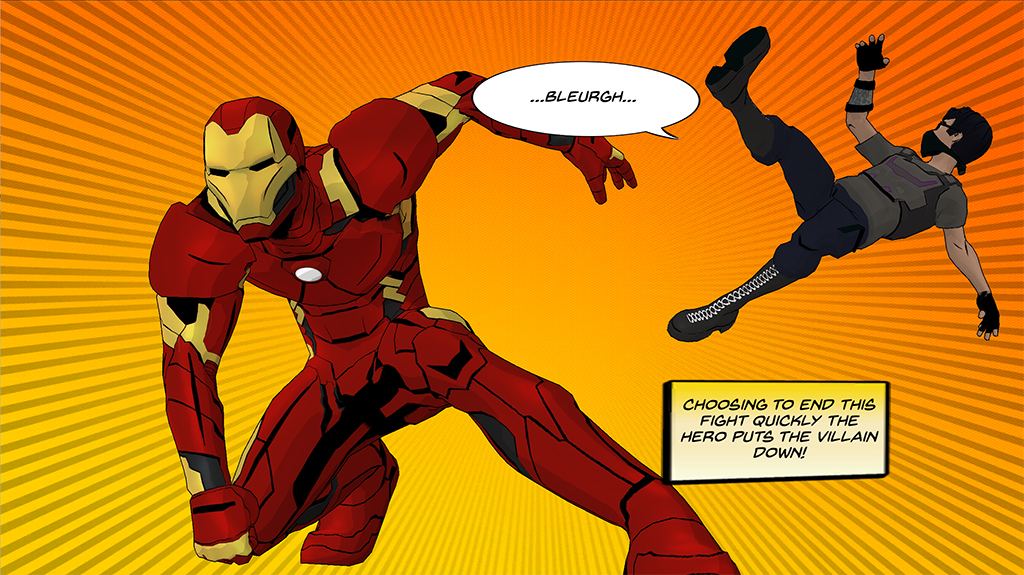 For example, Spider-Man could encounter a ‘thief’, a ‘scientist’, a ‘dumpster’ and a ‘mysterious vial’ during a mission. He’s armed with a deck of cards including verbs such as ‘examine’, ‘give’, ‘throw’, ‘talk’ and ‘attack’ and adverbs such as ‘bravely’, ‘quickly’, ‘heroically’, ‘powerfully’ and ‘confidently’.

Perhaps he’ll choose to ‘bravely give the mysterious vial to the scientist’, or perhaps he’ll ‘powerfully throw the thief into the dumpster’. There are numerous possibilities here, which each trigger different outcomes. The game rewards inquisitive behaviour – it’s usually good to ‘examine’ and ‘talk’ before ‘attacking’ and ‘throwing’, so a player can learn things about their enemies, and gain advantages in combat. 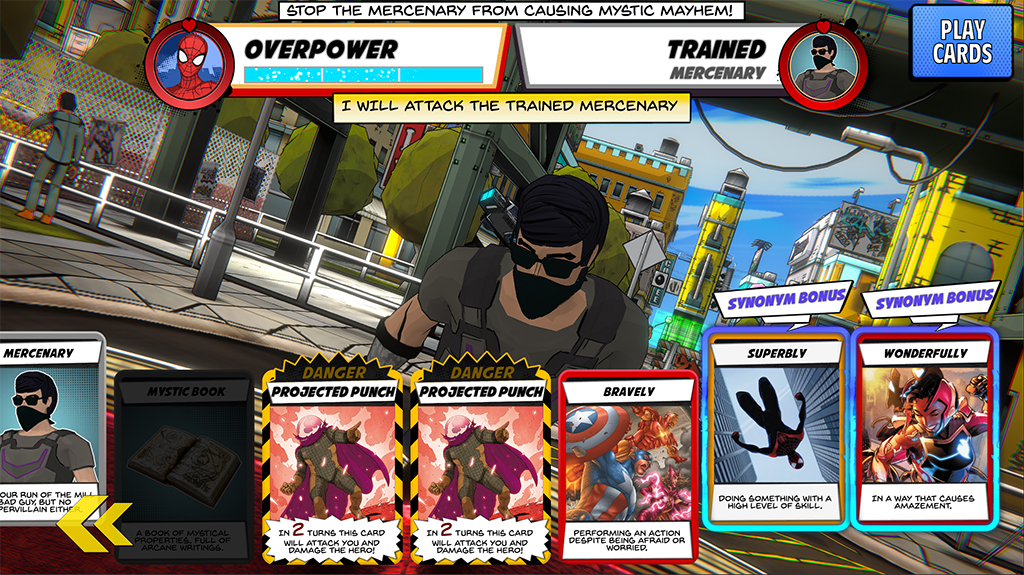 Word cards are also color-coordinated, to help children understand which words go together, and which don’t work so well. For example, you wouldn’t want to ‘talk to a scientist athletically’, as that doesn’t make sense – but talking confidently is great! A key part of the educational value is that the child learns words through contextual use, i.e. they might not know what ‘tactfully’ or ‘fragile’ means, but they can infer meaning through context and engagement.

The ‘stronger’ the sentence that is built, the bigger the reward. There is a ‘power-meter’ which is charged up by creating better sentences. For example, if a player chooses to ‘search the thief quickly and quietly’, their power-meter will grow because of the use of alliteration, as well as multiple adverbs. 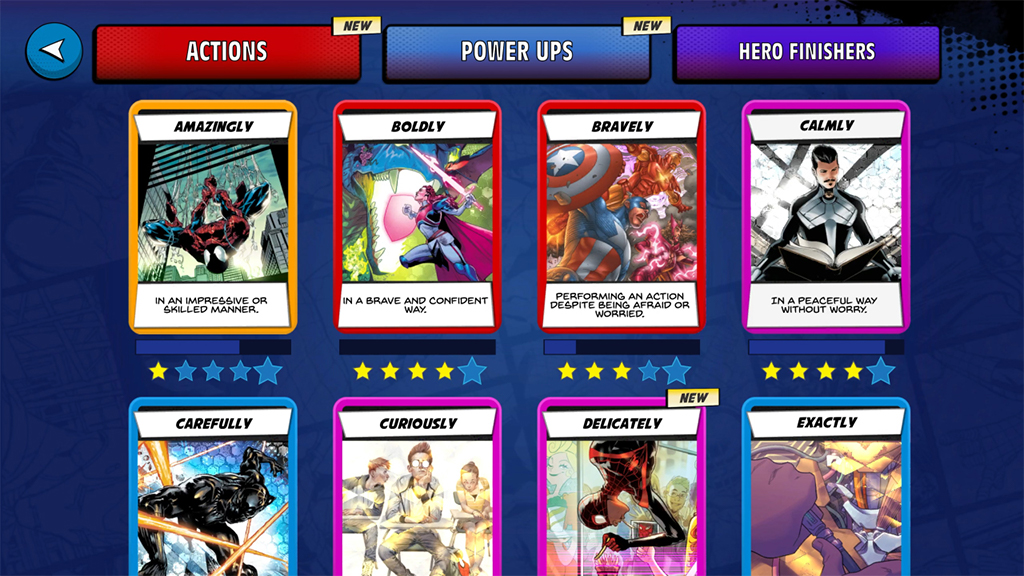 Every time a new word is encountered, it gets stored in a dictionary, and some cards can be upgraded several times to incrementally increase their power. Players can visit their in-game dictionary to review the words they’ve encountered, and remind themselves of their definition.

As players progress through the game, they unlock new heroes to play with. Each hero has their own bespoke deck of word cards – for example Hulk’s deck has semantics around ‘smash’ ‘throw’ and ‘powerfully’, whereas a more cunning character like Wasp would have a different set of core words. 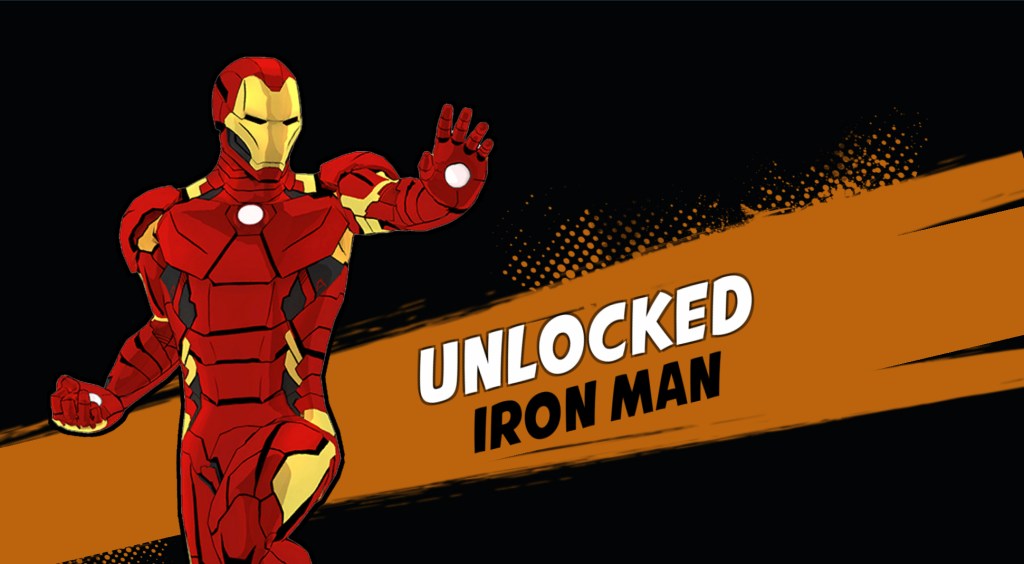 Another way MHT rewards great sentences is with Hero Finishers. Each hero also has three unique finisher cards. Once a player has built enough of a super-charged sentence, they can choose to finish off an enemy with a powerful special move bespoke to each character. 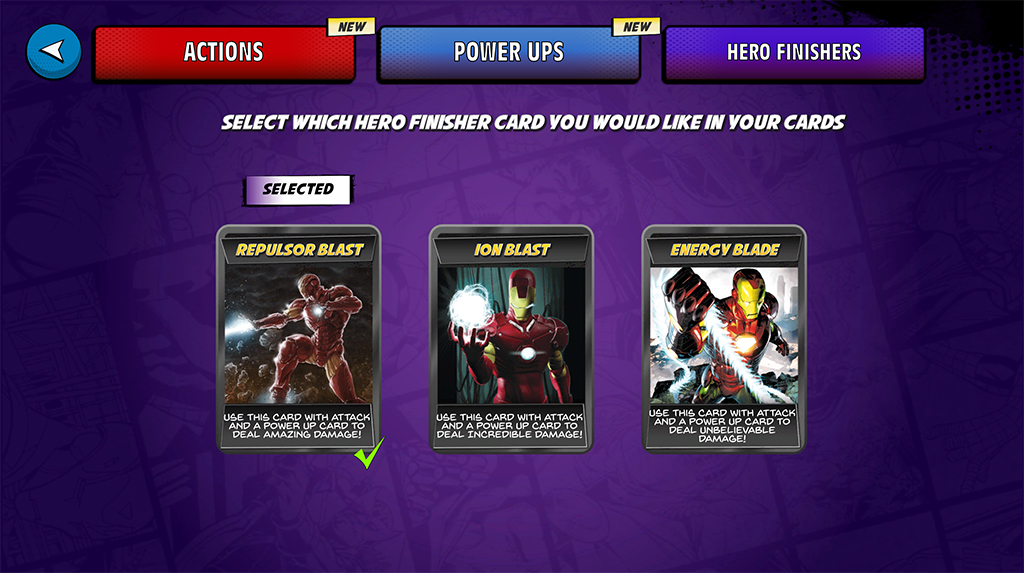 MHT is regularly updated, and has an exciting pipeline for 2021 and beyond. There will be new missions added, complete with new words to encounter, new heroes to play with, and new mastermind villains to challenge. Each hero has their own brand new hero word card deck – so more heroes equals more words to learn!

Marvel Hero Tales was developed with teachers, and is approved by child psychologists. It aligns reading with UK key stage 2/ US second grade. Dr Amanda Gummer of the Good Play Guide said:

“Marvel Hero Tales is an exciting adventure that will capture children’s imaginations while growing their vocabulary skills. Playing with their favorite Marvel characters provides an excellent springboard into this educational app, motivating young fans to keep practising their language skills.

Children will love seeing the vocabulary brought to life as part of their comic adventure – will they choose to fight the criminals powerfully, confidently, or cleverly?

This gives them a real feeling of involvement in the story while also encouraging lots of discussion about the meanings of each word, as children decide which will have the desired impact on their hero’s tale.”

Marvel Hero Tales is available to download for free* on Google Play or the App Store, on mobile devices and tablets. 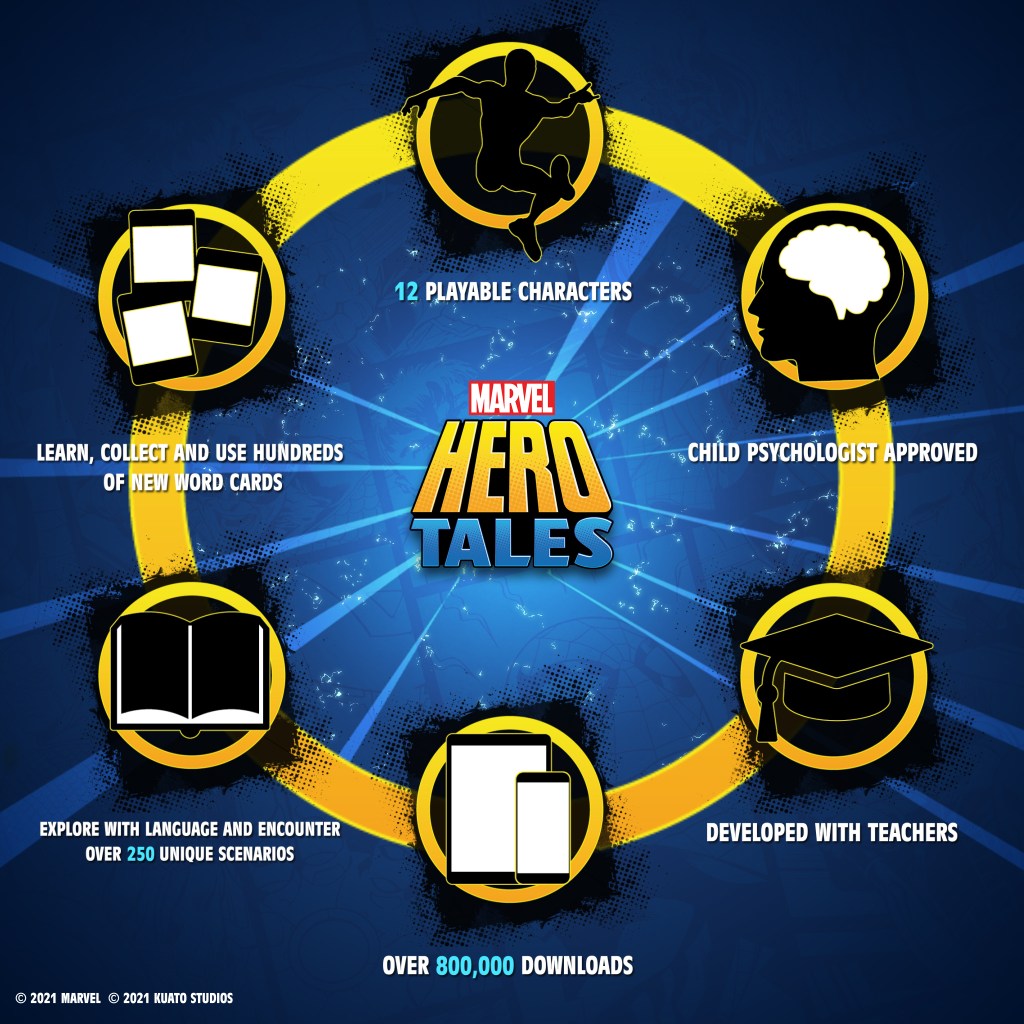